It was a bitterly cold January morning in 1984. My 6 months’ work placement at Cockermouth Auction had come to an end. Now I was about to start to my second placement. The work was required by The Royal Agricultural College before I was due to start a Rural Estate Management Course later that year. My father offered to send me to Australia for a gap year which was all but unheard of in those days. Having hardly been out of Cumbria, this was not too appealing especially when there was a regular girlfriend on the scene too. Many times since have I castigated myself for not taking the opportunity to travel, especially having met a couple of lads at college who had done so and enjoyed it, to the full!

Instead father talked to a local farmer from just down the road. Dick Clark was known and respected the country over as an exceptional livestock farmer. Mosser Mains farm carried a dairy herd, a pedigree Charolais beef herd and a fine flock of Swaledale ewes together with a noted Blue Faced Leicester flock.  lying six miles south west of Cockermouth, the land rises up the northerly slopes of Fellbarrow.  The placement couldn’t have been better and right on the doorstep. What I didn’t know on that first morning was just how hard my time at Mosser Mains was going to be.

Dick told my father that I wouldn’t find it easy. “If he can last” said Dick, “I will make a man out of him”. Armed with a brand new boiler suit, a pair of work gloves and a shiny new pocket knife, I set off in the pitch dark, down the hill to the farm.

So began the hardest six months of my life. Working up to 82 hours a week for a total of £25. It didn’t take long to realise that Dick had two expected speeds at which I would operate, “run” and “run faster”. Youngest son Alan, about 10 years older than me was milking the dairy cows and I was despatched with older son Benson to feed all of the housed cattle including the young stock and a pedigree Charolais herd.

By 9am the early morning work was completed and I was invited in to take breakfast with the family. Liz Clark cooked up a fantastic feast including porridge followed by a full English and toast to follow. As we sat down Dick declared that I was too fat and we were going to have to do something about it. So I was given the choice between the bacon and eggs or the toast. Clearly I was always going to choose the bacon! Then he asked me if there was anything I didn’t like to eat. “I’m not keen on liver & onions” I replied, munching in to my bacon.

The moment I had finished my breakfast I was told not to sit all day and to get back out there. When Dick finally finished reading the paper and came back out to the yard, I was wandering around not really knowing what to do. “What have you done since you came out”? He enquired. “Err nothing, I didn’t really know wh…….” I was rudely interrupted by Dick who gave me my first bollocking of very many over the next few months. “Didn’t know what to do? Open your bloody eyes man. There’s plenty of jobs to be getting on with. Don’t wander round my yard doing nothing”. Lesson number one was swiftly learned. Never again would he catch me doing nothing!

A little while later we were off up to the high ground where the pregnant Swaledale ewes needed some feed. The high ground was actually the most northern slopes of the Lake District running up to the rounded dome of Fellbarrow. From here you could see far across the Solway Firth in to Scotland. Not that I was looking across on this particular morning.

Dick had a fine flock of Swaledale sheep and was a renowned breeder of Blue Faced Leicester sheep too. The ewes were in lamb to the Leicester to produce the famous North of England Mule lamb. Neither Dick nor I had any inkling that one day in a few years’ time I would be selling these lambs for him at Lazonby auction, probably  the foremost mule auction centre in the land at the time. At least that’s what it said in the catalogues!

Dick drove the Land Rover and I sat with my legs out of the back door. Then I was instructed to dribble out the feed which were little hard ewe rolls or cobs as they are sometimes called. The sheep loved this extra feed and swiftly gathered to follow the land rover as a long line of cobs was tipped out slowly.

“Start pouring instructed Dick! Here was the first problem. I couldn’t get the feedbags open” Desperately I searched for my pen knife which was deep in the pocket of my boiler suit. I couldn’t find it. “Are you pouring yet”? Shouted Dick. “No just hang on a minute”. I replied. Big mistake!

“No I won’t bloody hang on. Get that bloody feed out. We’re half way up the field. What the bloody hell are you doing? Are you useless!? What the hell have I taken on here?”

Lunchtime arrived on my first day and I was already exhausted. It was a lovely feeling to wash my hands in warm water, smell the fragrant hand soap and feel the heat invade my freezing fingers. My boiler suit was left hanging outside in the passage. It was already covered in cow muck. No matter how I tried, my boiler suits always seemed to get mucked up, whereas the Clark lads hardly seemed to get a splash. I never worked that one out.

So I sat down starving hungry. A plate was presented to me and I could smell it before it hit the table. Liver and Onions. Nothing was said but I could just see the beginnings of a wry smile curling around Dick’s lips. Holding my breath with each mouthful, I ate the lot.

Having cleaned my plate, Dick asked me if I wanted some more. “Yes please” I replied and another huge hunk of liver was delivered to my plate. I ate that too, this time feeling quite sick. Never again if I was asked, would I say that I didn’t like something. Never again did we have liver and onions during my time at the farm!

By evening, milking was completed and we knocked off at 6pm, I made my way back up the hill to High Mosser. I was completely tired out. “Only another seven months” I thought. This must surely get better!

All through the spring I grafted away learning new skills from a talented livestock man. The stock always came first. Lambing arrived and for 6 weeks I did not have a day off. Being a young man who liked a night out, I still went out on a Saturday night, dragging myself out of bed on a Sunday morning to get down to the farm. If I was lucky I might be sent home on at coffee time on Sunday. Too tired to even bother showering I usually went straight to bed only to get up for Sunday evening milking.

The Blue Faced Leicester’s were the first to lamb. Brilliant sheep though they are in fathering the mule lamb, they are quite soft sheep, and not too hardy. They rather need mollycoddling, especially at lambing time. A breeder once told me that the only problem with a Leicester is that all it really wants to do is die. I think he had a bad lambing that year. Dick’s Leicester’s were now lambing in the sheds and one morning I was shouted for. This particular ewe was one of Dick’s prize animals. He had tried all ways to get the lamb out of the sheep but it was just too big. The ewe was twisted and turned and all manner of lubricant used to try and extricate said lamb. At one stage I had the ewe pulled up off the floor by the back legs as we sought purchase to pull the lamb. Even in the cool spring air I was sweating buckets. Eventually, the lamb was born by natural means but four of us were completely exhausted. I realised then that Blue Faced Leicester’s were great sheep but definitely high- maintenance!

As spring progressed and the grass grew, so the fields were full of ewes and lambs, thriving and growing in preparation for the autumn sales, “the harvest of the fells”. What a brilliant time of year, celebrating yet again the circle of farming life.  meanwhile a young lad raw  but ready, served his apprenticeship, learning just how hard that farming life can be. 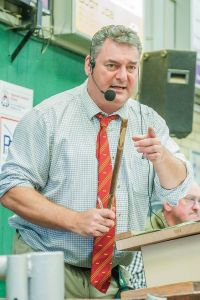 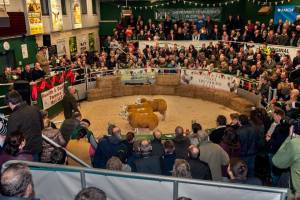